Meeting the World: An Anthropology of International PhD Students in Sweden 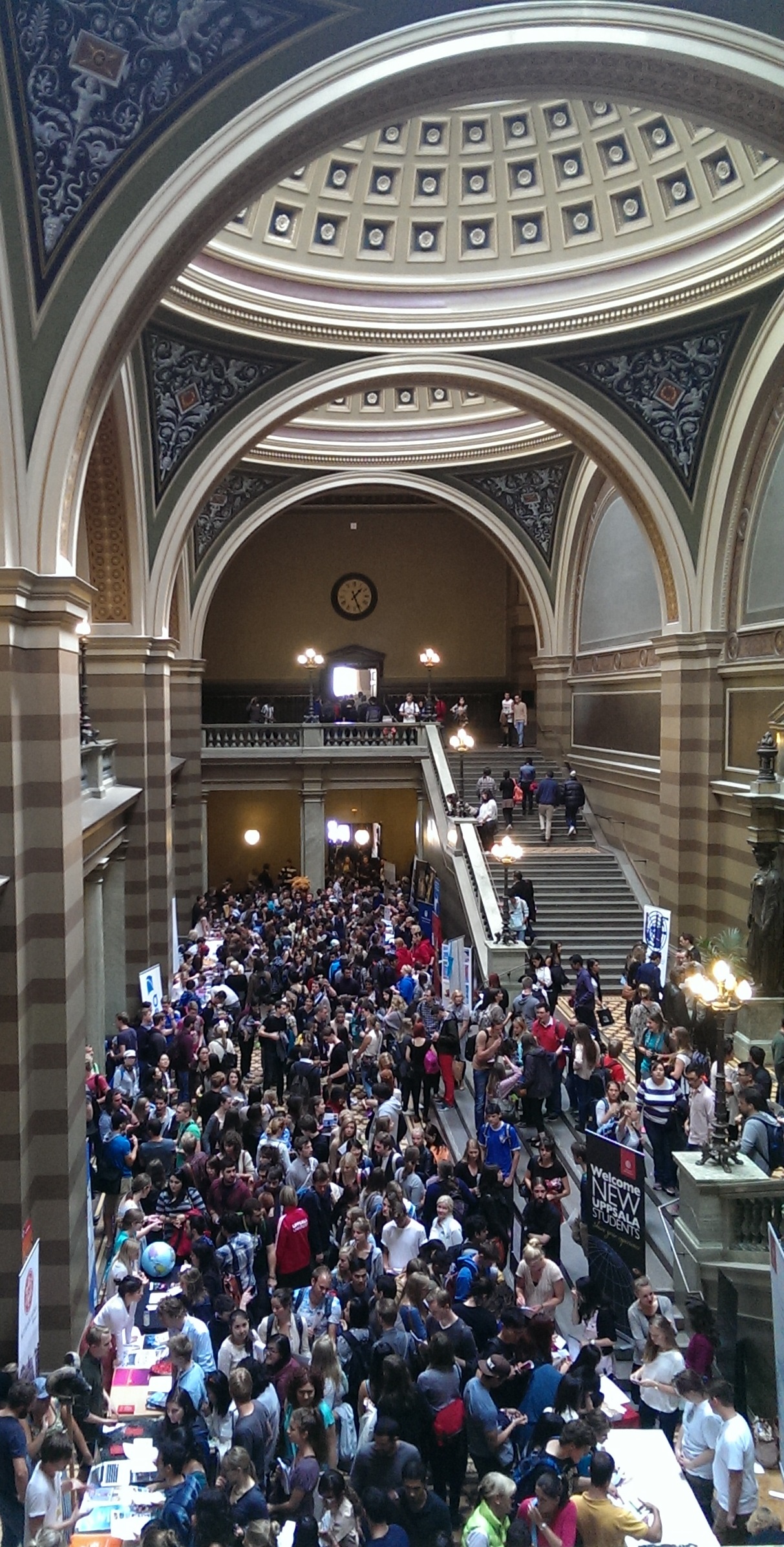 Twice a year, Uppsala University hosts a Welcome Reception and Fair for all its new incoming international students. During those fairs the entrance hall of the university’s venerable main building is full of people from all corners of the globe. The old walls echo with a mixture of languages and expectations of what the future might hold. While the majority of those who attend these fairs are exchange students, staying only for one or two semesters in Uppsala, there are also international master’s students (like myself) and international PhD students at the beginning of an academic career. Everyone attending the fairs has in common that they came to Sweden primarily for their education, being neither tourist nor immigrant.

For a lecturer or administrator at the university, it may seem obvious that the new students filing into the university hall are joining a Swedish university and encountering a rich tradition of Swedish university culture, many for the first time, and are entering a town and university well prepared to meet the needs of its international inhabitants. But, as an anthropologist carrying out research in Swedish universities, I asked myself how matters appear from the perspective of international PhD students themselves. Have they really left Pakistan, India, China, Uganda and Colombia to immerse themselves in the life of a historic university town nestled in the fields of Uppland? Or, are there other social and scientific horizons that are as important for explaining the contours of the place where they will spend the next four years or more? I would soon find that the answer was a not uncomplicated “yes” to both questions. For these early career scientists, their arrival in Uppsala and Sweden is as much an arrival to exciting and sometimes terrifying new international social and scientific fields (in the sense that the social theorist Bourdieu uses the term), as it is an encounter with Swedes, Sweden and Swedish culture.

Florencia meets the world in Malmö

Florencia, an Argentinian scholar who studied for a Master’s and a PhD in Sweden several years ago, explained quite clearly what it meant to come to Sweden for the first time:

One of my most significant experiences of meeting the world, took place in Malmö in 2005 when I was a student of the Master’s in communication for development – with funding from Sida. I was there only for a year, we were the first batch of international students. So they brought us all to Malmö and to Stockholm and it is not that I met Sweden for the first time, I met the world. And colleagues from Africa, and from India, they became friends and today they are my go-to–persons when I need to discuss something about their countries.

Just like international students at the welcome fair in Uppsala, Florencia’s arrival in Sweden was also an arrival to a place defined by its global diversity. This international community consisted of people who came to Sweden from abroad and were now helping each other in order to make sense of their new lives in Sweden. At the same time they were learning from and with each other about the different ways of living in other countries. They were creating their own ways of communicating within groups where often everyone was from a different country. During my research I often found that Sweden, be it in the form of a student nation gasque or a Dalacarlian ski mountain, was a scenic background to social and scientific fields characterized by international connections and opportunities for PhD students to cultivate an internationalized habitus, as Pierre Bourdieu called it. PhD students meet the world in Sweden, because of the people they meet and the experiences they make, which is shaping them for the future.

Raima gets lost in Uppsala

Not all entries and transitions from home to the international milieu of the Swedish university were easy, however. And Sweden, both as physical place and social field, was not always a passive background to the experiences of new arrivals.

One example that demonstrates this is the story of Raima’s arrival. Raima was a PhD student from Pakistan and in her middle twenties when I interviewed her. Although she already had a position as a researcher at a university in Pakistan, she decided to do a PhD at Uppsala University. Before she arrived in Uppsala, most of her physical needs had been taken care of by her supervisor and her department. They had found her a place to stay close to campus and upon arriving the supervisor and his wife picked her up from the airport and drove her to her new home. Once there, they explained to her where to buy groceries and how to find her way around Uppsala. They gave her a map for easier navigation.

Raima, however, did not know how to read a map. So instead of exploring Uppsala by herself, she stayed at home for two days with nothing more than some tea in her

cupboards (which she accidentally mixed with salt) and too scared to leave her place for fear of not being able to find her way back home. Unbeknownst to her new Swedish colleagues, Sweden had become a real obstacle to her transition to the international milieu at Uppsala University. Raima was confronted by a physical place, Sweden, which she did not know how to navigate, and by expectations of her new colleagues and supervisor that she could not meet. Something so seemingly banal as going out of the house became an almost insurmountable barrier.

Raima’s way out of this misery was through her social networks formed at home in Pakistan. She was able to contact somebody she knew from Pakistan who was studying in Stockholm. This person then put her in contact with another Pakistani and his wife in Uppsala. That couple picked-up Raima and finally helped her to access Uppsala. In this way she had the possibility to learn about her new physical and social setting with the help of somebody from the social field that had formed her during her childhood and early adulthood.

Despite the difficulties that can arise when coming to Sweden, most international PhD students at Swedish universities find ways to deal with the realities of both Sweden and the international community. In fact, many take the negative experiences and use them to learn more about themselves and others, thereby contributing to a PhD experience that leads to a new habitus that fits Sweden and the World.

Alex, a PhD student at Makerere University in Uganda and at Mälardalen University, shared with me some of the experiences that he had in Sweden. For him, Sweden was a “good definition of silence.” By contrast, he characterized his home in Uganda as noise. He felt lonely in Sweden, without social contacts and missing his family back home, while at the same time being anxious about his studies. Yet, he could also see the positive side of this, as he could focus much more on his PhD and had to learn things he did not know before. In summing up his experiences, he explained that the opportunities nevertheless outweigh the costs. In his words:

Beyond obtaining a degree, the people Alex met during his PhD were the most important aspects of his stay in Sweden, allowing him to understand much more about the world in general and Sweden in particular.

Bringing Sweden to the World

At a seminar for international PhD students, one of the speakers suggested to take fika home and to see it as a social innovation over which problems can be solved. The idea was, to use the things learnt in Sweden in more creative ways and also consider knowledge acquired outside the university. In one or the other way, this is what international PhD students do, although not always consciously. Fika, as something so Swedish that it is difficult to translate, is an example of how Sweden can be much more than the backdrop were international people meet, but rather something that can be spread and inspire others who have never been to Sweden. The idea to take fika home is especially interesting as fika is not just about having a coffee break but rather about having the possibility of dialogues on eyesight, without the constraints of formal hierarchies. Many international PhD students make fika a habit of their own, missing it when they leave Sweden and taking with them ideas about low hierarchies and the possibilities of spaces for discussion.

International PhD students who come to Sweden are not only challenged by how to integrate into Swedish academic society, but they also learn to integrate into an international community of scholars. This is at least as exciting and stimulating, and often also frightening, as encountering a new country for the first time. It is therefore important for Swedish universities to understand that it is not just about Sweden, but that there are other forces that require the attention and energy from the PhD students. At the same time it is also necessary for the scholars working with new international PhD students to understand that they are not only struggling with their research. It is moreover important not to take things for granted, as Sweden is not always so easy to navigate as it might appear on first sight and many international PhD students face problems unknown to Swedes. As Raima, Alex and Florencia found out upon arriving in Sweden, scientific research and social life are intertwined.

All of the international PhD students came to Sweden for their education. Yet, they received much more than just their PhD degree. Through their social and scientific encounters in an internationalized Uppsala, they adapted their own understanding of the world and of themselves, and acquired skills that allowed them to communicate not only with Swedes but also with people from other corners of the world. After their stays, many will return to their home countries or go to another place to continue their research, spreading the things they have learnt in Sweden. They become ambassadors for Sweden, and also important contact points for future collaborations with Swedes who want to work abroad. I have found that through international PhD students it is possible to meet the world in Sweden, while at the same time promoting Sweden to the world, and even further, connecting people across the globe.

Stefanie Mallow is fascinated by the different social spaces international students inhabit, and how they encounter Sweden and the world. Her newly published Master’s thesis entitled “Between Dark Days and Light Nights: International PhD Students’ Experiences in Uppsala” was successfully defended in January 2017 and is now available open-access: http://urn.kb.se/resolve?urn=urn:nbn:se:uu:diva-313651.

Stefanie holds a Bachelor degree in International Social Work from Germany and a Master degree from Uppsala University in Cultural Anthropology. She has previously worked with the DAAD (German Academic Exchange Service) in Jakarta and the International Association of Universities (IAU) in Paris.

The arguments and positions expressed in this article belong to the author, and do not necessarily represent those of Sveriges antropologförbund.