Nationalism as a Necessary Evil

In a modest room within the Govanhill recreational centre, on the other side of the wall from a children’s karate lesson, advocates for Scottish independence had their every-other weekly meeting. While thudding sounds from gymnastics mats echoed through the wall, the activists made plans for how to realise a socialist independent Scotland. This rather contradicting setting happened to be where my fieldwork started. It was the beginning to my understanding that Scottish independence was a far more complex issue than first realised. My initial interest in Scottish independence started with the question– why Scottish nationalists wanted to break away from the British union but stay in the European union? My fieldwork took place in the aftermath of the Brexit vote, in the autumn of 2017. While two years have passed since then, the question of Brexit and Scottish independence still remain urgent. The recent election on the 12th of December and the following decision on Brexit, will mean serious consequences for the Scottish independence movement. What I aim to argue and illustrate in this text is that Scottish nationalism is perceived as an almost necessary evil to escape the British union as well as a means to stay in the European union.

The Scottish independence referendum of 2014, ended with a relatively even outcome, but a No-vote nonetheless, with 45% Yes and 55% No. After the independence referendum, another defining referendum was held, the Brexit vote. Scotland voted in majority to remain in the EU, but the overall British vote ended in favour of leaving. Thus, this has to some extent made the question of Scottish independence more pressing, with the hope of being able to vote for EU membership once again. It is important to recognise that the Scottish independence movement is highly diverse and involve several different groups, however, for the purpose of this short medium I will make use of arguments that were recurrently raised and widely held. There is a majority of pro-independence voters who voted to remain in the EU. This might seem contradictory – voting to leave one union and voting to remain in another – and was discussed frequently by several informants:

Before arriving in Scotland, I had rather limited preconceptions of nationalism. I regarded nationalism to be about either ethnic unity or a protective stance toward the loss of national culture (see e.g. Hobsbawm 1990). However, Scottish nationalism proved to contain issues of diverse dimensions. First, it is important to understand the differences in English, British and Scottish nationalism. Curtice and Heath (2009) claim that Britishness and Englishness previously referred to similar identities, that one can adhere to the first as much as the other. However, because of changes in the British demographic and growing nationalist tendencies in Scotland and Wales, the identities have come to carry different connotations. British nationalism is synonymous with unionism and multiculturalism – the celebration of diversity within the UK. British nationalism exists in all countries of the UK and, no matter where you were born either inside or outside of the UK, it is still possible to call yourself British. English nationalism, on the other hand, have been developed in opposition, and have therefore become a highly ethnicity-based identity (ibid). This perception was shared also amongst the activists within the Scottish independence movement. Albeit with some hesitations since they often brought Scottish nationalism to the forefront as a highly inclusive form of nationalism, even more so than British nationalism:

Scottish nationalism is not about, where you’re born, it’s not about what colour of the skin you have, is not about if you’re an immigrant. It’s about whoever lives in Scotland is prioritized, and not depending on if you´re a white British person (Scottish Socialist Party member). 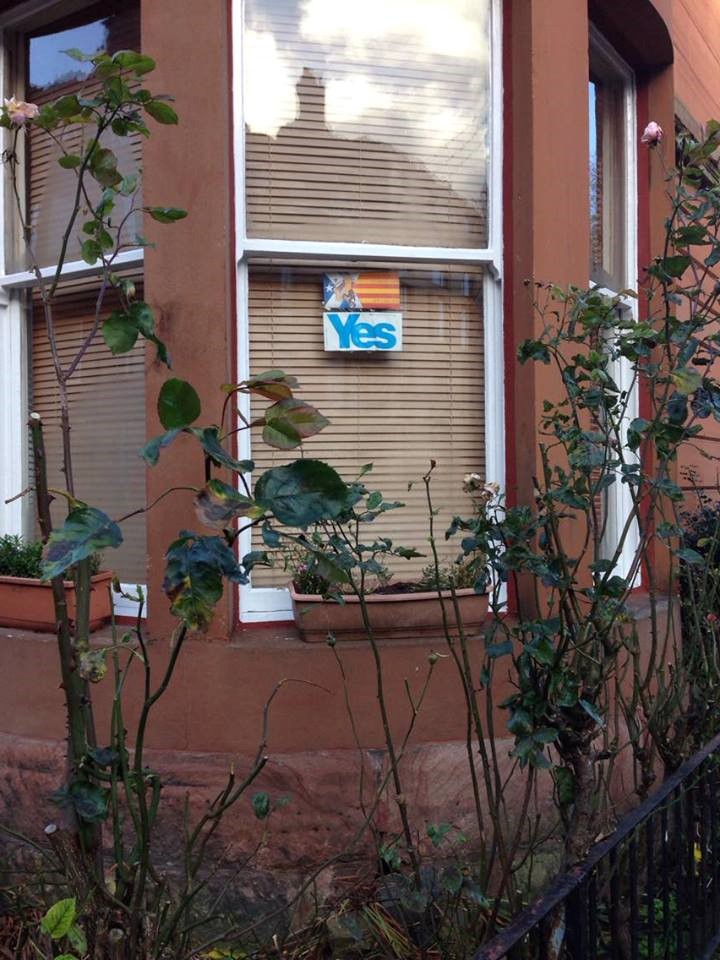 After a short round of presentations at a Radical Independence Campaign meeting, I started out by asking the group: why independence? The answers I got had that same underlying meaning, namely that: independence is the only way to break up the British state, and with that to break away from imperialism, capitalism and to create radical political change in Scotland. One of the activists argued that: “the independence referendum was not a nationalist vote, but a leftist vote”. Which was followed by a similar statement:

There is and has been a nationalist strand in independence, but, not mainly. A referendum was coming, we as the Left did not want it to be a nationalist movement. But rather about: what kind of Scotland do we want?

We have to change the foundation of the system, away from the private property, property of the few. That can’t be achieved within the contains of the UK. The phrasing is that there’s no Westminster road to socialism. It’s true! We can’t expect it to happen, we have to make it happen ourselves, and in Scotland we make that happen through independence. But only if it’s in service of our radical transformation of how our society is run (Scottish Socialist Party member).

The activists often proclaimed that being Left is at odds with being nationalist, instead nationalism is considered to belong to capitalism. The issue of nationalism can therefore be read as an issue of morality, it fundamentally contradicts their Left political ideology. These moral emotions are according to Goodwin, Jasper and Polletta (2004) products of how people in general, and people of social movements specifically, comprehend their place in the world.

I just think that the culture is just in general more collectivist and leftist. It just happens that Scotland has a culture that is less nationalist, in the blood and soil kind of nationalist, and more willing to help others and reconnect to the international stage. The phrase is always “little Englanders”. The idea of that they want to retreat, and they want to leave the European Union, and they want to live in a nice little English village. That’s a stereotype. It’s the opposite of Scottishness (Socialist Party Scotland member).

Even if nationalism most often was contested, it was still always present. It was constantly brought up during meetings or interviews in order to persuade their political positions.

In order to battle claims of nationalism, I found that the activist within the independence movement expressed themselves through international struggles and issues. The Catalonian independence referendum was held just before my fieldwork. The urgency of Catalonia, triggered by the violent actions of the Spanish state and the imprisonment of Catalonian activists, was met with great solidarity by the Scottish independence movement. I attended several events that were directed at the issue of showing solidarity with the Catalonian population. The Catalonian struggle was used as a platform, on which the threats to their own democracy could be uttered. Liedman (1999) writes that because of its emotional character, solidarity has often been regarded as separated from intellectuality, as a strictly empathetic endeavour over social and political identification. Instead, and I agree, Liedman claims that solidarity is a practice of the intellect because it challenges us, as humans, to construct and order who belongs to which group. He strongly suggests that solidarity is a practice toward groups that share similar traits, which ultimately reinforces your own group identity.

It’s not just for Catalonia, clearly here when it comes to Catalonia and independence, we draw the parallel to our own struggle for independence. So when we stand here and say ‘Visca Catalunya’ we are saying it for everybody. And when we say ‘No Pasaran’, we mean it in a real sense, we mean it on our own streets and in the streets of Barcelona (Trade union affiliated spokesperson).

Coming back to the question of EU it is important to mention that EU was often described as a capitalistic institution. But compared with UK, EU became the “lesser of two evils”. The issue of Brexit is therefore twofold. Even though the activists did not necessarily believe in EU politics it was still portrayed as a better choice than UK. This was thus met with concerns since if Brexit will happen it would make them even more isolated and more strongly connected to UK. As well as it was important for the activist to remain having an internationalist and globalist agenda. It appeared so that the globalist strand within the Scottish independence movement is a way to fend of nationalism and international solidarity enables the possibility for the Scottish independence movement to establish themselves as an anti-nationalist movement within a nationalist discourse.

Since Scottish independence is argued as not just a possibility, but as the only possibility, to create “radical political change”, there seem to be a collective understanding of Scottish politics as more prone to socialism than UK politics. Hence, rather than fighting for a nationalist ideology, it was made clear that the struggle for independence is a fight for a diverging political agenda. I have called this self-imagery, with the lack of a more striking way to phrase it, “an anti-nationalist national identity”, (a concept that share some similarities with Kešić’s and Duyvendak’s discussion on anti-nationalist nationalism amongst Dutch intellectuals). That is, the Scottish independence movement is, to a large extent, a Leftist movement that is left without any other option than to position themselves in nationalism – even if they constantly challenged the concept of nationalism – in order to achieve independence. Since independence is the only possible “road” to socialism.

Handler, Richard. 1988. Nationalism and the politics of culture in Quebec. Madison, Wis.: University of Wisconsin Press.

My name is Signe Askersjö I hold a master’s degree in Social Anthropology from Stockholm University. During my masters I focused on social movements on the subject of mobilisation and identity construction. In my master thesis with the title I’m not a nationalist but…, I discuss the continuous struggle for independence in Scotland. Since graduation, I have been dedicated to apply for a PhD position. My current interest is mainly concentrated on the Swedish rust belt with focus on the closure of mines, urbanisation and unemployment.