Listening to the practice

Listening to the practice

Selecting a field for my master study wasn’t simple. I had many ideas – too many perhaps. There were however two things that explicitly defined my search: Firstly, I had moved from Iceland to Stockholm with my family, to start the master program in Social Anthropology at Stockholm University. So, Stockholm was the location. Secondly, and most importantly in this context, I have a passionate interest in music and singing, and more generally sounds, and thus looked for a field that sounded, a field that was interesting to listen to. Additionally, there were several other features that influenced my search, such as my interest in creativity and making, the anthropology of design and the anthropology of art. The fact that I work as a research assistant for the Global Foresight: Anticipatory governance and the making geo-cultural scenarios project is also influential, where the discussion on future and anticipation is dominant (for further information see: http://www.socant.su.se/english/global-foresight). Under these influences, my field appeared and opened itself: Landscape architects make future Stockholm. In September 2016, I had gained access and began my study, where I listened to how landscape architects in Stockholm practice creativity.

Before I describe the method of listening to a practice, I will briefly discuss creativity in anthropological context. Anthropological studies on creativity have become increasingly important (see for ex. Hallam & Ingold, 2007), presenting the call for answers to questions about current ways of living and cultural improvisation. In that call, significant issues, such as urban living, sustainability, and immigration (among others), are met and dealt with. I used Hallam and Ingold’s definition of creativity in my thesis:

”By harnessing our understanding of creativity to improvisation rather than innovation we propose a forward reading that would recover the productive processes that have been neglected in cultural studies due to their almost exclusive concentration on consumable products (Friedman 2001: 48). The improvisational creativity of which we speak is that of a world that is crescent rather than created; that is ‘always in the making’ (Jackson 1996:4) rather than ready-made.” (Hallam & Ingold, 2007, p. 3)

I decided to use this definition, as it fitted well with my empirical data and field.

Entering this field of creative practice was intriguing in many ways. Even more fascinating was entering it with the method of listening and collecting sounds as data. That opened a new dimension – a sonic bricolage. That bricolage included various sounds that I categorized and strategically organized in two clusters: first sounds of inspiration and secondly sounds of creative practices whilst making. With that method, I did anthropology in sounds.

”We thus explore fieldwork experience mainly not as a geographical orientation to the mapping of place or personhood but as engagement with both Being There and with forms of distancing that help make cultural difference visible. That is, fieldwork is the registering of sensor impressions in a (temporal) process of mutual subject-discovery and critique, an engagement with persons, groups, and scenes that take into account the dynamics of our interactions as well as the differences between our locations and those of our interlocutors. (Borneman & Hammoudi, 2009, p. 19″ (underlining by author)).

Registering sensor impressions can be difficult, where words and texts are in some cases difficult to use, when producing a detailed story on the sensation from the field. As MacDougall said, “anthropological writing is therefore not simply cultural translation, as it is often described, but the creation of a completely new object” (2006, p. 44). The written text can in fact hinder the sensor impression so severely, that it creates another impression. MacDougall was referring mostly to visual material in ethnography, photos, and films. Sensor impressions are also about sound, taste, smell, touch, etc.

When I did my literary review on the method of listening to a practice, I found the importance of an anthropological research in design through sound urgent and calling. Not only could it provide a possibility of relative and reflexive entrance into the field of sound through its methodology, but also it enriches the theoretical field of studies on, with and about sound, in the broad and spread interdisciplinary discourse it is. I found a contemporary and an actual interest in the field of design and creativity, and in the methodology, using the anthropology of sound (or senses), and therefore a certain cry for a study in that field.

“Doing anthropology in sounds” (Feld & Brenneis, 2004) was my attempt to add knowledge in the registration of sensor impression, with the method of listening to the practice and collect sounds that are related to the practice of creativity. (A truly inspiring article, by Stefan Helmreich (2007), must be mentioned here, where he “did anthropology in sounds” and listened to the practice of diving). I wanted to take part in raising awareness to the sounds of a practice, and fight against the hierarchy of senses, in the discipline itself. The anthropology of sound is growing, affecting the methodology of hearing, listening and recording, which matches the current increase in studies within the anthropology of senses (see for example Erlmann, 2004; Feld, 2004; Ingold, 2000; Meyer, 2008; Pink, 2009; Bull & Howes, 2016).

Entering the field, among landscape architects at a well-established office, and listening to it´s sounds, was in a way both scary and exciting, for a becoming social anthropologist. It was scary, because it was a technological and a methodological challenge for a graduate student to experiment with listening, recording and collecting sounds. It was exciting because it could add important knowledge to this field of research, empirically, theoretically, and methodologically. Amid this angst and excitement, I found hope – a hope to answer questions, and a hope to raise other questions. 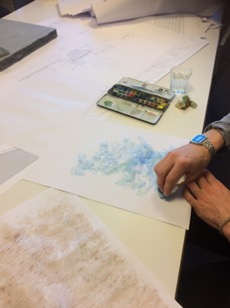 I followed the ethical guidelines made by the American Anthropological Association during my fieldwork, where the responsibility has been to the landscape architects at the Office (AAA, 2017). Following Hammersley and Atkinson, I focused on ethical issues, such as informed consent, privacy, harm, exploitation, and consequences for future research (2007, pp. 210-219), when I asked for admission into the field, and when conducting interviews or entering different settings in the field. With that in focus, I protect the person´s privacy and anonymity in the thesis. I changed all names of my interlocutors, as well as the names of their relatives or clients if mentioned in the context of practicing creativity. I included only photos without faces. I also treated the sounds according to AAA ethical guidelines.

The sounds were recorded on a ZOOM H1 sound recorder, a small, pocket sized recorder, featuring 96 k audio, lo-cut filter, and auto level controls. It suits well for recording voice and other sounds. The size of it was chosen at the expense of quality, for it didn´t disturb the field, drawing too much attention to it. The four landscape architects that made recordings at home were also easily able to take it with them, following some basic instructions how to use the Zoom. I, being a novice in sound recording for ethnographic purpose, found this recorder fit for my knowledge at the time. It suited my premier doing anthropology in sound. I then saved all the audio files on my personal computer, where I categorized them and analysed.

The audio recordings were analysed anonymously, as they came from personal surroundings and were at times indicative of highly private practices, especially the sounds that my interlocutors recorded themselves. During that data collection, I became aware of what is regarded as private and personal concerning audio data. It seems to be evaluated in different measures then visual data. The sonic material my interlocutors recorded from their home was of a wide variation, ranging from materialistic domestic sounds, to intimate and personal discussions and intimate practices. I am definite that some of this data would not be so willingly shared through visual recordings or photographs. From the 17 interlocutors I collected information from, 10 of them were prepared to record from their home. As it turned out, only four of them send me data. It was therefore not so easily accessible, but the data from those four was however unexpectedly rich, personal and private. Many of the sounds had no obvious link to the thesis as inspirational sounds, and were therefore left out from empirical analysis. Those sounds, nevertheless, are a part of my database, and have only increased my interest in the method, listening to the practice, in the field.

Sounds as inspiration and sounds as creative practice while making

The inspirational sounds were sometimes acknowledged in interviews, and then not as actual sounds, but as descriptions of sounds or specific sonic environment. In that way, I found them, and even felt them in discussion (see Ingold, 2000). This following example comes from Jon, where he describes how musical sounds motivates his creative practices as a landscape architect:

I never heard Sigurrós’ music during that discussion, although I have heard it both before and after. The sound was thus described, when referred to as musical piece by the band Sigurrós. Some sounds were acknowledged as real sounds, that I received, for example, on audio files from four of my interlocutors. The group of sounds for creative practice in making was recorded by myself at the Office. I coded the sounds in a finer grid, where I handle them firstly as technological and material sounds, secondly as voices and dialogue and thirdly as music. Technological and material sounds of creativity as a practice are, for example, sounds of a pen stroking a paper or clicking sounds from a tangent board, when drawing or writing on the computer. Those audio files cover about 2 hours of sounds from the Office.

This produced new knowledge about the topic of creativity in landscape design, and enriched the ethnographical methodology behind the thesis. The acoustic information “thickened” the ethnography as such, and provided important data for anthropological analysis. The sonic bricolage was there, as sounds of inspiration and sounds of making. It was in the biosocial movements through time, space and sound that the landscape architects got their ideas for creative practices in landscape making.

My conclusion bare witness of my methodological and theoretical framework. In this article, I have focused on the methodological part, where I described how I listened to how landscape architects practice creativity. Through that method I found that they gain inspiration and experience in their sonic environment, where voices, music, technological sounds and sounds from different material summon up an audio bricolage. The audio effects are both conscious and unconscious, sought and structured. Through the accumulation of sounds, the creative agent emerges. They become who they are, through negotiation and combination of social and biological structures. These structures are, among others, sonic structures. The sonic structures make way for the creative agent to become and practice. Without listening to the practice, I would never have come to this conclusion. The method thus proved as an alternative and functional way to address the field. I look forward to listen again.

Erlmann, V. (2004). But What of the Ethnographic Ear? Anthropology, Sound, and the Senses. In V. Erlmann, Hearing Cultures: Essays on Sound, Listening and Modernity (pp. 1-20). Oxford, New York: Berg.

Júlía Birnudóttir Sigurðardóttir is interested in the process of creation and making. Additionally to traditional anthropological participant observation methods, she especially likes the method of listening and collecting sounds.

Júlía holds a Bachelor degree in Social Anthropology from the University of Iceland and a Diploma in Educational Studies from the same university. She also holds a Master degree in Social Anthropology from Stockholm University. Her newly published Master’s thesis, based on a two months long case study at a landscape architect office in Stockholm, is entitled ”Practicing Creativity: Landscape architects make future Stockholm”. It was successfully defended in September 2017 and is now available: